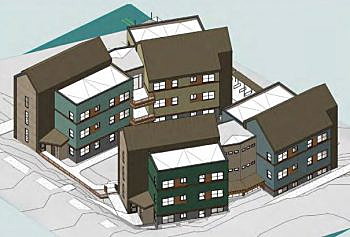 The Missoula City Council approved two group living structures on Monday, leading to the introduction of a new type of housing in Missoula.

The 46-unit Ponderosa Village, planned off Scott Street, will feature housing limited to one resident per room, including a partial kitchen and bathroom, one full kitchen per building and shared gathering spaces per floor.

Such “pod-style” housing is growing popular across the nation as cities look to address the affordability of housing.

“It will really creatively use our existing zoning code to provide a housing situation that really isn’t in common use in Missoula,” said council member Heidi West. “I think it provides an interesting solution to providing a more affordable housing option to folks in our community.”

Rent for the 250-square-foot, studio-sized rooms were estimated to be $600 with utilities included, according to Julie Landis, the project architect with In2itive Architecture. He put the request forward for the currently vacant property near West Broadway at the intersection of Scott and West Pine streets on Sept. 10.

Landis said earlier this month the dorm-like housing works well as an “easy” transition from college and for people who work in the area.

“There’s hospitals down the road. There’s retail and restaurants in the area as well,” he said. “So that’s the target audience, someone younger and an employee of the neighborhood.”

Council member John Contos, the sole member to vote against it, said in an interview with the Current he felt like “we are cramming too many people into one place.”

“It’s a new concept, and I would hate that to become a more common development in Missoula,” Contos said.

Before coming to Missoula in 1993, Contos lived mostly in Boulder, Colorado. During that time, he said Boulder experienced massive growth, and to accommodate they made housing decisions that “compromised the atmosphere to move people in.”

He drew parallels to Missoula undergoing a similar boom in population and mentioned land available elsewhere to develop in Missoula that wouldn’t have to require such dense housing.

Even though Contos doesn’t want to see more housing like Ponderosa Village, he expects it to represent the start of a trend for similar projects in Missoula.

“I just couldn’t vote for it in good conscience,” he said.

The project received around $96,000 in tax increment financing in February for improvements in the public right of way, including sidewalks.