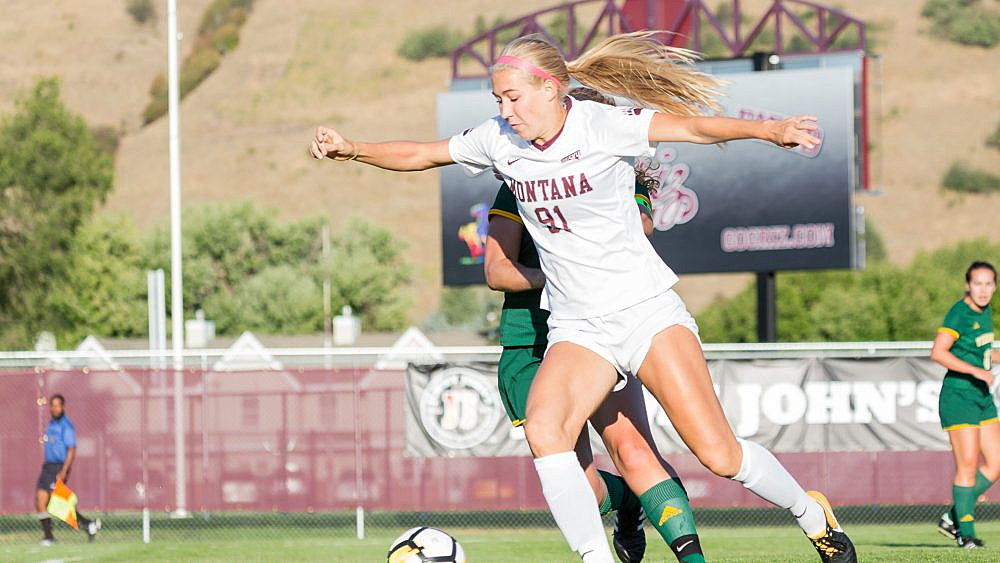 The Montana soccer team will close out its pre-Big Sky Conference schedule this week when the Grizzlies play at No. 16 Washington State on Friday night.

Montana will open league next week when it hosts Northern Colorado on Sunday, Sept. 23.

Facing a ranked opponent will be nothing new for Montana – the Grizzlies have done so 18 times in their history. Nor will it be new to face a ranked opponent on Washington State’s home field – Montana did so just last year, losing 1-0 to No. 14 Nebraska in a neutral-site match.

But none of that makes Friday’s match any less of a challenge.

Washington State advanced to the round of 16 in last year’s NCAA tournament before bowing out in double overtime on the road at Florida and the Cougars are off to a 5-0-0 start this fall while outscoring their opponents 11-2.

“They had a tremendous season last year and have one of the better programs in the nation this year,” said first-year Montana coach Chris Citowicki. “We’re really looking forward to it.”

Washington State lost one of the best goalkeepers in the Pac-12 in its matchup against Idaho last week when Ella Dederick suffered a season-ending injury in the 74th minute.

That setback may have made winning a Pac-12 title much more difficult, but the Cougars will still be a tough defense to crack, especially for a team that hasn’t scored a goal since Aug. 31.

Montana was shut out by its last three opponents: North Dakota and Wyoming, which the Grizzlies played to 0-0 draws, and on Sunday by UNLV.

With his team’s scoreless streak at more than 310 minutes, Citowicki is tweaking some things this week — both in personnel and where they play on the field, and tactically — all with a goal of preparing for next week.

“There are three seasons for us,” said Citowicki. “There is nonconference play, there is conference play and there is postseason play. What matters for us is Big Sky, so we’re constantly asking ourselves, What have we learned so far? What has to be fixed so that we’re ready for the start of conference?

“We’re making a couple of small adjustments this week in practice that I think are going to change things for us. Friday will be a good way to test them and get used to them, then we’ll take that into Big Sky.”

Washington State is more than a stout defensive team. The Cougars have scored multiple goals in four of its first five matches, with eight players getting into the scoring column, 11 when assists are added.

“They are a very athletic team and just quick, so they are dangerous,” said Citowicki. “Their biggest asset is their athleticism. They love the individual battle of going at you 1-v-1. If you win enough of those, you up winning games.”

Washington State is ranked No. 16 nationally and one of four Pac-12 teams in the latest United Soccer Coaches top-25 poll.

The Cougars are ranked fourth in the Pacific Region, behind Stanford (1) and UCLA (3), which met in last year’s national championship match, and 6-0-1 USC (2).