Kindness ran as a common theme throughout the University of Montana’s 121st commencement ceremony on Saturday, tinted with messages of “failing forward” as today’s graduates enter a rapidly changing world.

Before a packed house at the Adams Center, Seth Bodnar made his debut commencement appearance as president of the university, bestowing an honorary doctoral degree upon his presidential predecessor, Sheila Stearns, and praising the school’s faculty for its work and dedication.

“The faculty of this university consists of the dedicated women and men to whom we have entrusted the minds of today’s graduates,” Bodnar said. “The faculty is the heart of the university, and we’re exceptionally proud and grateful for their passion for their teaching and mentoring.”

In all, the university awarded more than 3,344 degrees, including one to Brent Fitzgerald, the outgoing president of the Associated Students of the University of Montana.

“You’ll have the opportunity to be right or to be kind – always choose to be kind,” he told the audience. “This seemingly simple lesson my mom taught me growing up ended up being the foundation for one of my guiding principles. No matter the situation, we have the chance to be kind to one another.” 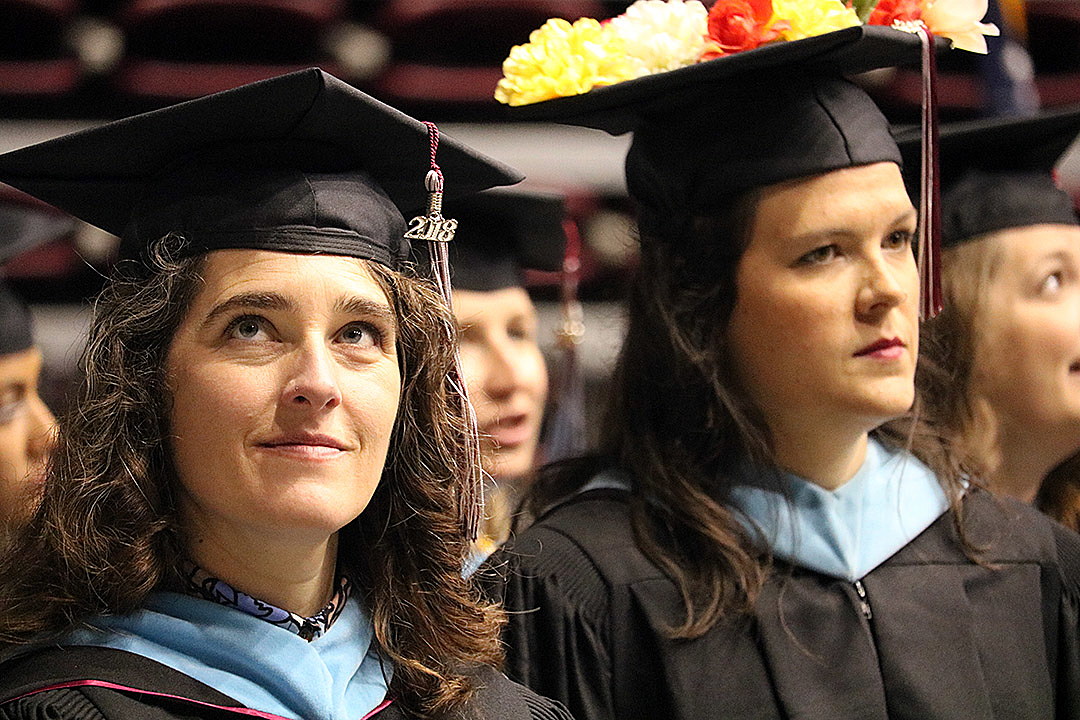 Amid the pomp and circumstance, it was Eric Sprunk, the chief operating officer for Nike, who delivered the keynote address. The Hellgate High School and 1986 University of Montana graduate painted a picture of a rapidly changing world, complete with revolutions in technology and medicine.

It was, he told the students, an amazing time to graduate college. It’s also a time of challenges, and it will be up to today’s graduates to solve them.

“I think it’s the most dynamic, exciting and creative time in our history,” he said. “But the world we live in and the planet we live on are also pretty messed up, and you’re going to have to do something about it.”

Sprunk detailed the beginnings of what he deemed the fourth industrial revolution, one that is witnessing the integration of technology into everyday life, as well as the human body.

Those born today will never need a driver’s license, or know what one is, he suggested. Science can print organs and place them into human bodies. Medicine is creating vaccines for Alzheimer’s, AIDS and cancers through machine learning and artificial intelligence that patients will wear, not ingest.

“No matter your degree and what you’re about to pursue, this is your new reality,” he said. “You’re given this revolution to lead, shepherd and manage for those who come after you. All of this technology is best used to augment human performance, not replace it.”

Despite the promises of the future, he said, the world is faced with difficult problems. Earlier generations have been reckless with the world’s nonrenewable resources, leaving the planet in an environmental pinch.

The gap between the rich and poor continues to accelerate, begging questions about the future of capitalism, and human suffering is widespread, he said.

“We have 70 million displaced people right now living in conditions and places they were forced to inhabit because of war, famine, or simply because of their ethnicity or religion,” he said. “Your role is to use the extraordinary innovation that exists today, and what you will create, to better manage the future than we’ve done with the past.”

It’s against that future and those challenges that Sprunk composed his parting words of advice for the Class of 2018. Keep the aperture on your professional life and future life as open as you can, and as long as you can.

Think about your career from an opportunity perspective. Know what you don’t know. Don’t be a poser, don’t be arrogant, and surround yourself with good people.

“I lean on the education I received from this school every day,” he said. “It’s why I feel so strongly about the education you receive at a liberal arts school. You get an education that gives you the skill set to continue learning the rest of your life. That’s the most critical skill you can possess today.”